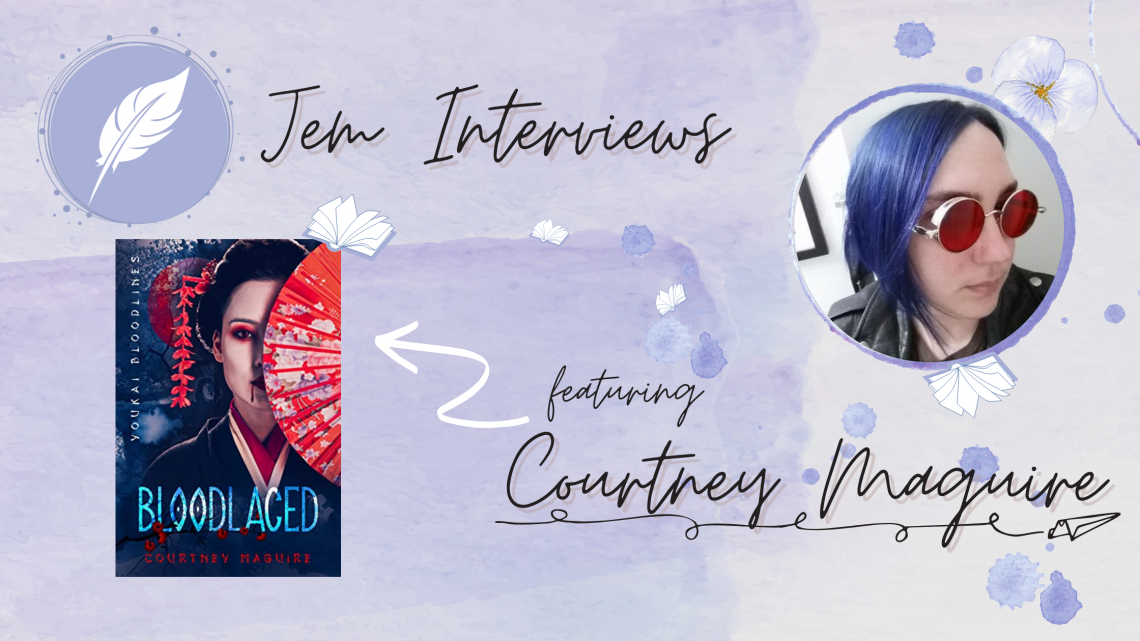 Hello everyone, and welcome to Jem Interviews!

Today I have Courtney Maguire, author of Bloodlaced!

Bloodlaced is an LGBT eastern-inspired fantasy romance that follows Asagi, a man and a woman. Asagi is unable to protect a boy they saw as a son and is sold to Mahiro, a kind and gentle master, and they fall in love. When Asagi is poisoned, Mahiro is revealed to be a youkai, a demon that feeds on blood, and saves Asagi’s life—at a high price. Asagi now craves blood, but the boy they once tried to protect reappears under a new master. Asagi must decide what it means to be human to protect what they love most.

Now onto the interview with Courtney!~

JEM: Hello Courtney, thank you for joining me today on Jem Interviews! First, I’d like for you to tell us in your own words more about Bloodlaced.

COURTNEY: Thank you so much for having me! Bloodlaced is a book that was a long time in the making for me. It tells the story of Asagi, a servant in the house of a feudal lord in late 17th century Japan. Life for them is…not easy to say the least. Asagi has been the victim of systematic abuse by their masters their whole life. When they finally find themselves in a place that feels safe with a kind master that loves them, they find out that not everything is quite what it seems.

JEM: Bloodlaced includes the topics of love, identity, having the strength to accept yourself, among many others. Did you plan these themes out in advance, or were they something that developed while writing?

COURTNEY: These themes came about pretty naturally as Asagi’s character developed. Honestly, I just wanted to write a weird vampire story but Asagi stole my heart in a way not a lot of characters do. They are incredibly strong and full of love in a way you would think almost impossible given what they’ve gone through and their real strength is in that love. At the beginning of the story, Asagi is quite resigned to their lot in life and it was really the love they found, the motherly love they had for Tsukito, the gentle love they had for the girls in Mahiro’s house, and the passionate love for Mahiro himself, that pushed them to be something more. Once that aspect of Asagi’s personality solidified, everything else just fell into place around it.

JEM: Piggybacking off of that question, what inspired you to write Bloodlaced?

COURTNEY: As I mentioned already, I set out initially to just write a vampire story. It also just so happened to be in the heat of the Twilight craze and the world had been inundated with vampire stories. I knew if I wanted to write my own, it would have to be different, something no one had seen before. It all started with a (frankly, terrible) short story with three characters and almost no plot. I shared it with a friend who liked it for some reason and encouraged me to write more. Thus, in an act of pure stubborn self-indulgence, the universe of Youkai Bloodlines was born.

JEM: What has been the best part of being published? The worst?

COURTNEY: The best: when readers contact me to tell me they loved my books. Call me pretentious, but I LIVE for that. Email me, DM me, @ me, stand in front of my house with a bullhorn (okay, maybe not, but you get the idea), and I will love you forever for it. Readers should do that more often. Writers are fragile and often self-loathing people. Nothing makes our day like a little validation. We certainly don’t do it for the money.

The worst: Everything that’s not writing, pretty much. Personally, I am an introvert by nature and self-promoting is my personal hell. I think it’s linked to that self-loathing thing. I’m convinced no one cares about anything I have to say and raising my voice is just a bother.

JEM: Bloodlaced is not like other vampire/youkai books I’ve read, and I’m eager to read more. When will book 2 be released, and what should we expect?

COURTNEY: It makes me so happy to hear you say that! Book 2, titled BLOOD PACT, releases May 4, 2021, and is the story of Hiro, a geisha working in Kyoto, and the samurai who steals his heart, Sakurai Hideyoshi. Don’t worry, Asagi is there, too 😉 While it builds on ideas introduced in Bloodlaced, especially when it comes to youkai Hunters, it is very readable as a stand-alone, so don’t be afraid to jump into the series at Book 2. I really love these guys and the snarky relationship between Hideyoshi and Asagi is one of my favorite things to write, so I can’t wait for you to meet them.

JEM: And lastly, what is something you’d like your readers to know?

COURTNEY: Most of all, I want my readers to know I love and appreciate every one of you, even if you’re not the one with a bullhorn 😉 Also, I want to make sure everyone knows that I’ve recently started a reader group over on Facebook where you guys can chat about books, life, or whatever floats your boat. It’s just getting off the ground, but I’ve got some fun things planned for the weeks leading up to the release of BLOOD PACT, so you don’t want to miss out. I may even give members an early peek at the cover O.O!

Everyone is welcome and you can join here.

Courtney Maguire is a University of Texas graduate from Corpus Christi, Texas. Drawn to Austin by a voracious appetite for music, she spent most of her young adult life in dark, divey venues nursing a love for the sublimely weird. A self-proclaimed fangirl with a press pass, she combined her love of music and writing as the primary contributor for Japanese music and culture blog, Project: Lixx, interviewing Japanese rock and roll icons and providing live event coverage for appearances across the country. 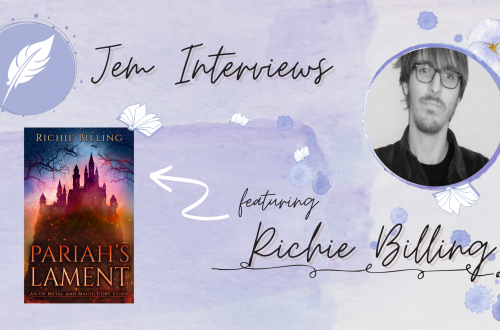